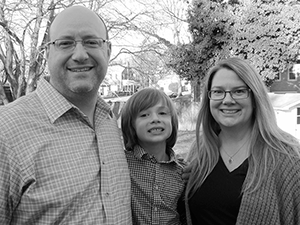 If you’ve attended any Women United events or socials, you’ve probably met Maia. She has been a vital part of our organization since 2008 when she moved back from Atlanta to her hometown of Charlottesville with her husband, Glenn, and their then 1 year old son, Casner.

“A dear friend shared with me the details of Women United. I joined and fell in love immediately… I think graduating from Sweet Briar College, an all women’s college, opened my eyes to women’s issues, which has naturally progressed to include children’s issues too.”

“I wanted to be involved in something where I felt like what I was doing would make a difference locally and I wanted to meet other fabulous women – I’m kind of a social person. But what I didn’t have was extra time. Women United fit the bill on all three accounts!”

Maia has found time for a number of causes. She recently accepted the position of Development Coordinator with Big Brothers Big Sisters of the Central Blue Ridge. She is chair of BIG GIG 2014 with the Boys & Girls Clubs of Central Virginia. Maia is also on the 2014 Bill Howard Golf and Derby Party Committees with the Alzheimer’s Association of Central and Western Virginia and is on the United Way – Thomas Jefferson Area’s signature fundraising event committee.

When not at work or involved with committee projects, you’ll find Maia with her now six year old son, who she says “keeps my life happily in a constant state of harmony and chaos.” Maia is also an avid reader. She is in a Book Club she calls “fantastic” and she, Glenn and Casner have started to read the Harry Potter books as a family. Maia and Glenn also have a new obsession: paddle.

When asked about challenges and opportunities women have in our community, Maia answered “I see both in Charlottesville. Although there’s always an opportunity to advance, hire, elect and mentor women more, we have amazing outlets available to only women such as the Business Women’s Round Table, Quadruplicity, The Junior League, The Women’s Initiative, Charlottesville Woman, Charlottesville NOW (National Organization for Women), Women United – and of course MANY others!